An interesting article written by Beth Braverman appeared in the December 2nd issue of The Fiscal Times. She reported on a new study by the Transmerica Center for Retirement Studies which shows that retirees are enjoying their retirement, but are plagued by financial concerns. The study found that:

TCRS President Catherine Collinson stated, “Mathematically, the notion that people can work for 40 years to save enough and accrue sufficient benefits to fund a 30-year retirement does not add up.” She further added, “Solving this equation requires changes in how we think about aging, employment, and retirement itself.”

It is never too late to start a PLAN! Call me – I can help. Margaret Janecki, EPC, Independent Financial Planner

Retirees Are Enjoying Their Golden Years, But Wish They Had Saved More! 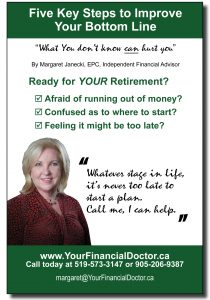